Before fermenting the juice, I would like to present the process of transformation, that is, the breakdown of sugar into alcohol and carbon dioxide.

Various yeasts cause this disintegration. One, as well as many other microorganisms – harmful, neutral, but also such, which have a beneficial effect – it settles on the fruit during harvest. Shredded fruit and sugar-containing juice provide good food for these organisms. Roughly speaking, they feed on fructose, simultaneously producing alcohol and carbon dioxide in equal parts. During this metabolic process, energy is created and the liquid heats up. The higher the temperature of the fluid (up to 40 ° C in large barrels from 10 000 l), the faster yeast cells multiply and the more sugar they break down into alcohol and carbon dioxide. The formation of carbon dioxide can be seen and heard, this can be recognized by the rustle in the barrel, bubbling water in the fermentation tube, Lid rattling on the hydraulic lock.

Ochsle's weight allows us to accurately determine, to what extent have yeast cells broken down sugar and how much alcohol has enriched it. Most of the carbon dioxide escapes from the vessel and is released. Only a minimal part of it remains dissolved in the wine (he is responsible for the "freshness" of the wine).

After the sugar is completely consumed (Ochsle's weight indication is 0) yeast cells lose activity, they still eat "their own fat" for some time, until they finally sink to the bottom; yeast sediment is formed. 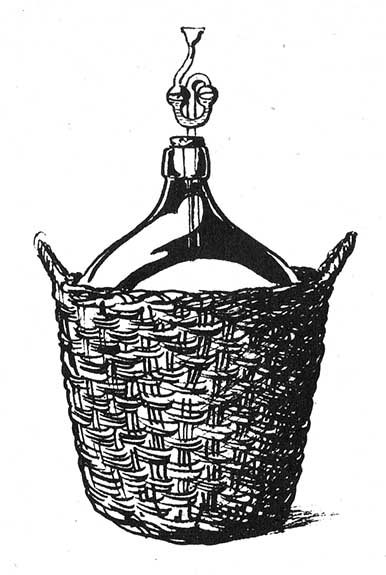 Only then is the final stage of fermentation a little different, when fruit juice contains a large amount of sugar (above 90 ° Ochsle). The rule is: the more sugar, the more alcohol. But from a certain level of alcohol content, yeast cells can no longer live in their own metabolic product. Starting with the concentration of the order 15- 18% alcohol inhibits and destroys the development of yeast. The remaining sugar does not ferment further and creates a residual sweetness in the wine.

This is the theoretical course of fermentation, but in practice there is often a lot of trouble with fermentation, when, for example, set, that is fruit juice, is not fully mature and infected with pathogenic bacteria or when fermentation has not been completely protected against external influences. As soon as a mistake is made in the preparation of the wine, the fermentation process changes. Finished product – wine – it will have a different taste and smell. Different types of yeast are in competition with each other, and in a form that is very unfavorable for wine. For example: there are noble yeasts (Saccharomyces cerevisiae), which can make more alcohol from sugar than wild yeast, that produce little alcohol or that can only ferment certain types of sugar, and when they are deficient, they feed on other substances. These are yeasts called Saccharomyces apiculatus, sheepskin and mucilaginous yeasts, which, to make matters worse, can be present in the company of acetic bacteria and various types of mold.